Home / Middle East and North Africa / The BDS Movement and the Iniquity of the “Apartheid” Tag
I respect Roger Waters’ right to encourage others to boycott Israeli goods, though I disagree with it. But what is plainly foolish, not to mention an insult to that noble struggle against racism, is to talk as former the Pink Floyd bassist does about “apartheid”.

The BDS Movement and the Iniquity of the “Apartheid” Tag

Let us not kid ourselves: it is not very far from “I hate Israel” to “I hate Jews”.

We can – and should – criticise Israel’s government for its policy on settlements. We can criticise it for some of its policies towards, and sometimes its statements about, Palestinians. And as with any disputed territory, we can and should debate how that territory should be distributed between its claimants. Even if we might think it counterproductive at a time when Israelis and Palestinians are sitting down to talk for the first time in years, we can recognise the legitimacy of those who choose not to buy goods from a country because they disagree with its government.

I respect Roger Waters’ right to encourage others to boycott Israeli goods, though I disagree with it.

But what is plainly foolish, not to mention an insult to that noble struggle against racism, is to talk as former the Pink Floyd bassist does about “apartheid”.

And that is because it is plainly ridiculous to compare the two. On the one hand, we have a democratic country with a free press, which maintains free and fair elections on a universal franchise and whose main opponents are demonstrably corrupt, authoritarian and (in the case of Hamas, at least) regularly engaged in terrorist activity involving the indiscriminate killing of civilians, not to mention the recruitment of child soldiers. On the other, a tightly-controlled, illiberal pariah of a regime which disenfranchised the vast majority of its inhabitants and which was unlucky enough to have as its leading opponent a man who turned out to be one of the twentieth century’s great statesmen.

They are just not the same. Not to mention the notable fact that the “Wall”, in this case, was built for completely different reasons from the Berlin Wall, an earlier target of the Floyd’s political statements. Berlin’s was built to stop people from escaping, rather than to protect from attack, but Waters sees it as the same. Yet again, the cause of Palestinian self-determination is let down by those who purport to represent it.

But such terminology is also symbolic. Once you start to throw around words like apartheid, you have started to subscribe to the irrational conversion of state into bogeyman.

And you can see how that develops: you crassly cut corners with your arguments. And, like the brilliant and shocking Gerald Scarfe covers of the Floyd’s original album, you play fast and loose with emotions and symbols. But this time, not in a good way.

I do not believe Waters to be an anti-Semite. As Mark Gardner writes accurately at the CST blog, “anybody remotely familiar with his The Wall knows he is no Jew-hater”.

I do, however, believe him to be an idiot.

Look at it like this: you put on a concert tour. And last week, as part of your stage show, you decide to make a point about Israel . So you put the Star of David symbolically next to symbols of some of the world’s most unpleasant dictatorships. However, in your haste to make a point, you forget that the Star of David is not just a symbol on the flag of Israel but a centuries-old symbol of Jews everywhere, who might just be a bit annoyed to be lumped in together with a country they may or may not even identify with.

You forget, too, that perhaps, just perhaps, they might feel you are deliberately trying to add insult to injury by putting that same symbol on an inflatable pig, which for them is a historic symbol of uncleanliness.

Sometimes it’s not so much the big things; it’s the little ones. That’s where it starts.

By using sweeping statements and slogans, we remove our need to think. That is always the danger for politicians of left or right. We all of us have our “dog whistles” and they are all bad.

Where it ends is the attitude of some other people who support the BDS movement for sanctions against Israel. Take the case of the delightful Ms Carole Swords, as far as I know still the Respect chair for Tower Hamlets, filmed here shouting “go back to Russia” at a Jewish man outside an Israeli shop in London. Or the leader of Respect, himself, of course, who last week defended the indefensible David Ward, the Liberal Democrat MP who has been suspended from his party for seemingly also finding it difficult to tell the difference between Israel and apartheid South Africa.

And let’s not forget Galloway’s walkout from a debate in Oxford when he found out his opponent was an Israeli. As if he were somehow mixing with the unclean.

It is, sadly, the legitimising of that demonisation of Israel by well-meaning fools like Waters which morphs gradually into that nastier side of the BDS movement. “I disagree with Israel” is a perfectly valid position, which I find myself adopting quite often (especially with Bibi Netanyahu in charge).

But it easy for that argument then to drift: I disagree with Israel; I dislike Israel; I hate Israel. There is certainly no lack of empirical evidence that there are those within the BDS movementwho hate Israel, as there is no lack of such evidence within the Palestine Solidarity Campaign.

Despite their efforts to recruit within Labour, frankly, the party would do well to have nothing to do with either; the truth is that the formation of a left-wing group which truly supports and furthers the interests of Palestinian people, rather than their politicians or the group’s own wider political agenda, is long overdue.

And let us not kid ourselves: it is not very far from “I hate Israel” to “I hate Jews”.

Hatred is hatred: once we lose our rational faculties on either side of a debate and move to demonise the opponent, we lose the argument. In our own small way, we start to legitimise those for whom hatred is instinctive; and that includes those who attack Jewish schools in Toulouse and burn mosques in the West Midlands.

Marchant, R. (2013) ‘The BDS Movement and the Iniquity of the ‘Apartheid’ Tag’. Human Security Centre, Human Rights and Conflict Resolution, Issue 3, No. 4. 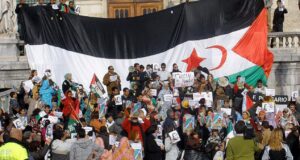