Home / Middle East and North Africa / ‘No fly’ and ‘no-drive’ zones to become a long-term reality in northeastern Syria?

‘No fly’ and ‘no-drive’ zones to become a long-term reality in northeastern Syria?

The United States has expanded its operations against the Islamic State forces operating from northeastern Syria. They are leading a multinational coalition which is using air power to target installations of importance to that group. From the get go the Obama administration has been clear that these operations are not coordinated with the Assad regime in Damascus and has reiterated its adamance that they will never co-ordinate or cooperate with Mr. Assad given his crimes against the Syrian people. [1]

Furthermore the U.S. has considered the implementation of a ‘no fly’ zone in Syria. This may, the U.S. admits, involve directly taking on the Syrian Air Force and destroying its air defence network. A task they are doubtlessly capable of carrying out. [2]

Similar no fly zones have been implemented in the past, the most salient cases which come to ones mind would be Iraq between the 1991 war and the 2003 invasion, Yugoslavia in the 1990’s and Libya in 2011. Syria would bear many similarities to these, particularly the no-fly zones the Anglo-American (along with the French until the late 1990’s) coalition enforced over north and south Iraq to hem in Saddam Hussein and stop him from attempting another massacre of the Kurds and Shia Iraqis. [3]

Regarding the ongoing air campaign in Syria the U.S. are readily admitting that an air campaign alone won’t defeat Islamic State but merely hamper its operational capabilities. It has announced that it is ready to train thousands of “moderate” Syrian opposition fighters. Fighters who of course also seek the removal from power of Assad and the dismantling of his regime. And fighters who will be protected by U.S. air power in the midst of their campaign against Islamic State. [4]

This leads one to contemplate the potential that this coalition will enforce a long-term aerial umbrella over those large swaths of Syria’s northeast where they are currently carrying out reconnaissance and attack missions against Islamic State. Coalition air power could essentially allow those opposition forces to consolidate their hold and control over nearly half of the country (remember the Assad government controls just under half of Syria at present) and prevent any major Syrian air or ground force from targeting those forces. Which in turn could see to the establishment of a physical alternative to Assad’s rule on the ground in Syria.

If the long view is taken on “degrading and destroying” Islamic State in Syria then the presence of coalition air power over Syria could be used to assist in a successive campaign that sees an alternative to Assad established on the ground. And a potentially viable post-Assad solution to the ongoing Syrian crisis finally implemented.

2014-10-01
Guest Contributor
Previous: Why NATO? Searching for Relevancy in the 21st Century
Next: South Sudan, UNMISS and International Responsibility 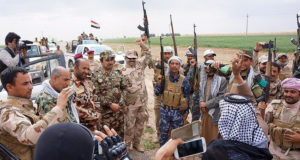