Home / Latest Articles / The Trump Tornado and US policymaking 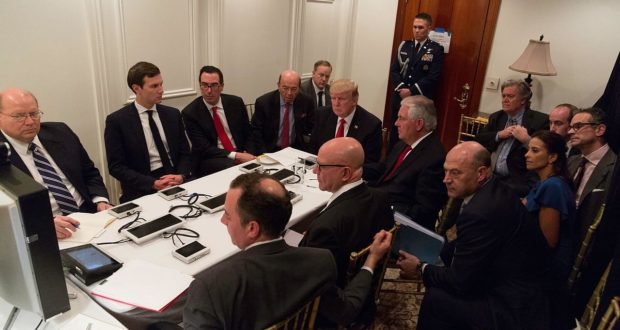 The Trump Tornado and US policymaking

One of the most obvious facts to anybody observing politics at present is how Donald Trump has shifted norms and values in many areas since his election as President of the United States. From his gung-ho use of Twitter through to his policy proposals that have aimed to radically change the scope of US and world affairs, it is clear that Trump has set about doing things in his own way without regard for criticism, difficulties or consequences.

In the realm of foreign, security and defense policy, Trump has utilised numerous executive orders in order to institute his policies. For much of his Presidency thus far, Trump has used executive orders, action or the threat of executive action as a way to undo or damage significant Obama foreign policy achievements. There is the withdrawal of the US from the Paris climate accords, a reversal of many of the accommodations made to Havana under the Cuban thaw, and finally continuing hints and threats that the US will refuse to comply further with the Iran deal unless it is renegotiated. Aside from tearing down Obama policies, Trump has also recently made a radical move of his own in having the US recognise Jerusalem as the capital city of Israel. The decision to remove democracy promotion from the list of US foreign policy priorities also marks a significant departure from bi-partisan consensus.

With respect to the action and orders undertaken to reverse or damage the Paris, Cuban and Iran deals, Trump has defied wider opinion on these issues, swatting aside concerns from allies and critics alike, both internationally and domestically. In Washington, whilst some legislators such as Senators John McCain, Bob Corker and Jeff Flake have been vocal in criticising these actions, Congressional Republicans have by and large supported Trump’s decisions. On the Jerusalem recognition, Trump again relied upon the traditionally very pro-Israel tilt of the Republicans in Congress to reinforce his actions, and once more ignored allies concerns. Naturally, Trump also enjoyed the support of Israel on this matter, as well as on the Iran deal. However, the deemphasising of the importance of spreading democracy has received significant pushback from hawks such as Senator McCain. From the above, it is clear that Trump has repudiated prior standards set by the Obama administration in foreign and security policy, as well as those dating back to even older administrations.

In terms of the relationships both within and between executive departments, there has been a remarkable level of independence from some officials and behind the scenes disagreements between departments and the West Wing. To take some examples, there have been several instances where Secretary of Defense Mattis, widely seen as an independent thinker rather than a loyalist to Trump, has looked to defy his boss on issues, such as on Trump’s proposed ban on transgender enlistment in the armed forces, on North Korea policy and on the Iran deal. At the State Department, the more beleaguered Secretary Tillerson has undertaken a controversial management reorganization that has led to considerable public critique of his cuts. In tandem, Tillerson has also been thought to be lacking in influence as Secretary of State in terms of getting his viewpoints heard with the President, losing out instead in power battles to other figures such as UN Ambassador Nikki Haley, CIA Director Mike Pompeo and Senior Adviser Jared Kushner. For Haley’s part, she has displayed a similar level of independence to Mattis, being seen as articulating her own kind of foreign policy that is much more in line with traditional Republican sentiments on issues such as the Middle East and NATO. Director Pompeo is noted to be running the CIA in line with Trump thinking whilst also retaining some independence to his own views and allegiance to traditional Republican foreign policy. Finally, National Security Advisor HR McMaster is seen as an increasingly influential figure, having successfully fought off media assaults from alt-right outlets during his tenure.

With such a complex array of personalities and an unconventional President, a look at the relationships between Trump and the above key policymakers, as well as others, is also key. In the past few weeks, there has been noted speculation that Trump has lost confidence so much in Secretary Tillerson that he is planning to replace him with either Director Pompeo or Ambassador Haley, the former being the frontrunner. Tillerson infamously had to hold a press conference to address rumors he had called Trump a ‘moron’ in a private meeting, but then was noted not to have explicitly denied referring to Trump in such terms. This incident was just the latest in a long line of briefings and reports detailing how Tillerson’s influence has slowly declined since becoming Secretary of State, particularly since Tillerson has taken a more ‘establishment’ viewpoint on many foreign policy issues. As mentioned above, Director Pompeo is far closer to the President in terms of access and favorability, with Secretary Mattis and Ambassador Haley also enjoying closer relationships and influence with the President despite their tendencies to disagree with their boss on significant policy issues, again as reference above.

The status of close access and positive favorability with the President for advisers is, however, very likely a temporary one. Whilst Mattis, Haley and Pompeo are in favour at present, there are many clear examples of formerly close advisers who briefly shone and then flickered out. The departures of Michael Flynn, Reince Priebus, Steve Bannon and the declines of Tillerson and Kushner’s influence show that success with the boss in Trump world is often fleeting.

Such status seems to also apply to relationships with international and domestic leaders. Trump initially praised Theresa May and yet recently tweeted condemnation of her efforts to stop the spread of radical Islamic terrorism after she criticised his retweets of Britain First. In tandem, Trump appeared to offer a sly endorsement of Marine Le Pen in the French presidential election and yet Trump has also been shown to be keen to play up talk of him having a good relationship with Emmanuel Macron, despite Macron’s consistent critiques of some of Trump’s foreign policies. In my view, the criticism of May about Trump policy was far more muted than that of Macron’s critiques, yet May has earned herself a harsher rebuke from Trump.

This confusion extends to relationships with Congressional leaders also. Trump, going back to his time in the Republican primaries, has had fractious relationships with House Speaker Paul Ryan and Senate Majority Leader Mitch McConnell that have continued into his presidency. Similarly, whilst Trump was content to break ranks and work with Senate Minority Leader Chuck Schumer and House Minority Leader Nancy Pelosi on safeguards for young, undocumented immigrants, he has also since publically lambasted them both.

It is therefore clear that Trump’s usurping of ‘business as usual’ extends to several areas. In specific policy, he has undone or is attempting to undo a lot of Obama-era initiatives whilst also going beyond traditional orthodoxy from prior administrations with decisions such as the Jerusalem recognition. His administration is characterised by an unusually high degree of independent thinking officials with their own support bases and similarly by an unusually high degree of chaos, with division between senior figures and the President on significant matters of policy. In terms of differences from Obama, there are clear separation from him from Trump in many respects, especially in terms of policy, personnel and relationships with key leaders.

In tandem with this, the President’s personality is attributed as a major reason behind the numerous instances, far too many to document in their entirety, of erratic behaviour and shifts in relationships with key domestic and international leaders. Trump has certainly usurped a lot of norms and values since assuming office in terms of policy, government management and relationships with allies and leaders. As yet, it is too early to define the long-term effects of such a management style and policy setting technique.

As ever, the media is divided on the issue. Some analysts believe despite the chaos, Trump is quietly pushing his agenda to reshape policy through fairly successfully, with key examples in pieces from the LA Times and The Atlantic. On the other hand, pieces from Real Clear Politics and CNBC offer an alternate view that Trump is simply creating chaos with no effectiveness in policy terms. Time will tell on success, but what is clear is how Trump is throwing aside old norms and values to reshape things in his own vision. The question is, what is Trump’s vision?

2018-01-02
Max Rodgers
Previous: The good, the bad and the pragmatic: European Union-Western Balkans relations in the age of Brexit
Next: Long-Range Precision Fires: a budget conventional deterrent for Europe