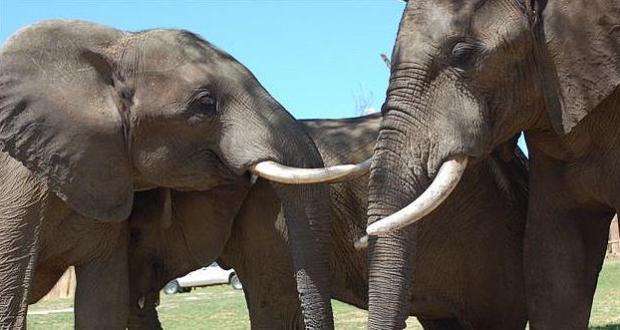 Around Central Africa rebel militia groups are trading wildlife for supplies to fuel their illegal activities. Wildlife poaching is of huge national and international concern as the current rate of poaching is placing African elephants at a risk of extinction within the next ten years. The UNSC has de facto established wildlife poaching as a threat to international peace and security – imposing sanctions on poachers – because of its detrimental impacts on the environment and its link to armed conflicts.

Poor law enforcement, weak governance structures, and armed conflict in the Central African Republic (CAR) and Democratic Republic of Congo (DRC) are fuelling elephant poaching and the illicit trading of ivory. In the 1970s Garamba National Park, in the DRC, boasted over 20,000 elephants, today however the elephant population has plummeted to less than 2,000.[1] It is thought that rebel militia groups from surrounding countries, including the Lord’s Resistance Army, are trading ivory for food, weapons and ammunition to fuel their illegal activities.[2] The two primary destinations for this illicit trade are China and Thailand.[3] Since mid-April this year poachers have killed four percent of Garamba National Park’s elephant population by removing their tusks for ivory trading.[4]

It is estimated that raw ivory is worth more than $1,300 per pound due to its high demand;[5] therefore ivory trading is particularly profitable for organised armed groups. Environmental crimes may be attractive for organised armed groups in developing countries – especially those ravaged by conflict and subject to poor governmental control – because they are less likely to be investigated and prosecuted compared with other illegal activities. Both the DRC and CAR are crippled by instability and armed conflict, allowing poaching to thrive relatively unnoticed, with government capacity and resources being used for other purposes. In addition, park rangers are increasingly unable to deter poachers and protect wildlife as poachers are becoming more organised and are developing greater hunting capacity. Rangers must obey criminal law and therefore may only fire in self-defence resulting in a lack of shots fired against sighted poachers.[6]

Wildlife Poaching as a Threat to International Peace and Security

The international trade in endangered species is prohibited under the Convention Against Trade in Endangered Species (CITES). This convention aims to regulate the protection of living resources to ensure their survival is not threatened. However, as a result of national governments ineffective enforcement of the regulations prohibiting wildlife trafficking the United Nations Security Council (UNSC) has taken steps to enforce the law by adopting targeted sanctions against poachers in the CAR and DRC. In Resolution 2134 (2014)[7] and 2136 (2014)[8] the UNSC adopted an asset freeze and travel ban against individuals and entities supporting armed groups or criminal networks through the illicit trade of natural resources, including wildlife and wildlife products in the CAR and DRC. Furthermore, it is notable that UNSC Resolution 2134 (CAR) recognised the continuing deterioration of the security situation in the CAR, characterized by an absence of rule of law and instability and Resolution 2136 (DRC) recalled the linkage between the illegal trafficking of wildlife as one of the major factors fuelling and exacerbating conflicts in the Great Lakes Region of Africa. Both national governments are unable to enforce the CITES regulations due to poor governance and the prevalence of conflict. This is not the first time criminal networks and rebels have exploited the environment to fuel armed conflict. Natural resources are frequently illegally traded to fund criminal activity; most notably ‘blood diamonds’ funded the conflicts in Liberia and Sierra Leone.

Both UNSC Resolutions determine that the situations in the CAR and DRC constitute a threat to international peace and security in the region, and it is thought that the UNSC de facto established wildlife poaching as a threat to the peace.[9] The UNSC has referred to poaching and the illegal trafficking of wildlife as among the factors fuelling the conflict in the CAR in a number of resolutions.[10] The explicit linkage made by the UNSC between wildlife poaching and trafficking and the proliferation of arms used for armed conflicts illustrates the serious threat to international peace and security posed by poachers trading wildlife to fuel conflicts. This highlights the UNSC’s increasingly broad interpretation of ‘threat to the peace’ and reflects its intentions to enforce international law in respect of regulating transnational security threats.

Although the illicit trade in ivory and other natural resources fuels armed conflicts another issue lies in the environmental impact. In the last decade at least sixty percent of all elephants have been lost in Central Africa, and CITES have warned that within the next ten years elephants in Central Africa could become extinct. [11] Wildlife poaching not only affects wildlife populations but also has negative effects on the environment and local communities.  The extinction of elephants in Central Africa could considerably affect tourism in the local area, and not to mention the imbalance in the ecosystem.[12] The extinction of one whole species of prey from a natural habitat can affect the food chain, resulting in adverse effects for other animals. Thus the effects of poaching can be destructive to environmental sustainability and the international community should be working together to crack down on illegal poaching and trading of endangered species.

Research by TRAFFIC (the wildlife monitoring network) has found that the number of ivory products in Thailand has almost tripled in the past year and a half, with Bangkok named the capital of Asia’s ivory trade.[13] The enforcement body for CITES has attempted to crack down on the demand of illegal ivory trading by requiring the worst offending countries, including China and Thailand, to submit their action plans to deal with the illegal trading within the next 12 months, failing so CITES has the power to ban its member nations from importing any wildlife products from the offending countries.[14] Another recent effort by CITES has been the partnership with the UN Conference on Trade and Development. The partnership aims to provide customs authorities with stronger tools to regulate the import and export of CITES-listed species[15] which will hopefully improve enforcement of the CITES regulations by national governments.

UN delegates, including the UN Secretary General and the President of the UN General Assembly, met in Nairobi for the first UN Environment Assembly from June 23-27th. The new Environment Assembly is an initiative of the UN Environment Programme and represents the highest global platform for environmental policy making, with one of the inaugural session’s main topics of discussion being the illegal trade in wildlife.[16] It was recognised that the economic, social and environmental impacts of the illegal wildlife trade can only be effectively tackled through targeting both the supply and demand chains.[17] As the illegal trade in wildlife is a serious threat to sustainable development a worldwide concerted effort, in support of national efforts, is desperately needed to address this threat to international peace and security.

[9] Anne Peters, ‘Novel Practice of the Security Council: Wildlife Poaching and Trafficking as a Threat to the Peace’, 12 February 2014, EJIL: Talk!, http://www.ejiltalk.org/novel-practice-of-the-security-council-wildlife-poaching-and-trafficking-as-a-threat-to-the-peace/

[16] Boni Odinga, ‘UNEA – What’s it about? World Leaders meet in Nairobi to Decide on the Future of our Environment’, 29 May 2014, UNEA Blog: http://www.unep.org/unea/blog_unea.asp