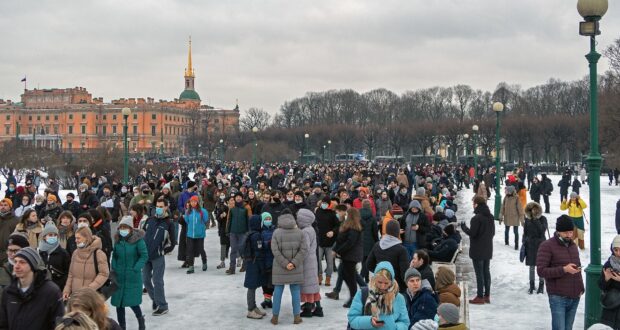 On 23 January, demonstrations broke out in over one hundred cities and towns across Russia. The trigger that brought Russians to the streets was the arrest of political activist and opposition leader Alexey Navalny, who was detained immediately after his return from Germany. In early February, Navalny was sentenced to just under three years in prison, prompting further outrage and demonstrations. Russian authorities responded with violence, arrests and threats of criminal cases, and the fines for violating laws relating to protests have been substantially increased. People, however, continued to take to the streets across the country, and a resumption of anti-government demonstrations is currently planned for the spring. Navalny’s arrest and the events that followed are a reminder that, in Russia, you are either on the side of the government or against it – and that if you are not part of the ruling elite and its inner circle, your rights and freedoms are expendable.

For more than a decade, anti-corruption campaigner Alexey Navalny has been the most prominent figure of Russian opposition to President Vladimir Putin, and thus a target of surveillance and attempts at suppression by the Kremlin. In 2013, Navalny was found guilty of embezzling 16 million roubles (£300,000) from a timber firm in Kirov while he was advising the region’s liberal governor back in 2009. In 2016, the case was sent for a retrial by the Russian supreme court after the European Court of Human Rights (ECHR) found procedural violations in the verdict. The following year, Navalny was found guilty of the same accusation, and given a five-year suspended sentence. The conviction was eventually declared unlawful by the ECHR, forcing the Russian government to pay Navalny compensation in line with the ruling. As the suspended sentence was upheld, however, the anti-corruption activist was barred from running in the 2018 presidential election.

Under the terms of his probation following this suspended sentence, Navalny was required to register with Russian authorities twice a month in person until the end of 2020. This is something that would have been impossible for him to do, as prior to his return to Russia, Navalny spent five months in Berlin in an induced coma. A toxicology test conducted in Germany showed that, in August 2020, the opposition leader was poisoned with Novichok – a military-grade nerve agent –, and it was not until December that he recovered. Navalny has accused the Kremlin and the Russian secret services (FSB) of orchestrating the poisoning attack – Moscow, however, continues to deny involvement.

Immediately after the Kremlin critic’s arrest, Navalny’s anti-corruption team released a two-hour video investigation that claims Putin spent illicit funds on an extravagant Black Sea palace. The Russian President has denied ownership of the palace, which Navalny’s team allege was built with bribe money from oil bosses and billionaires. The video – which now has over 100 million views on YouTube – was released at a time when a decline in living standards is increasingly being felt by the Russian people, and served as a reminder of the widening economic gap between the government and its citizens.

In 2020, the Russian economy was estimated to have suffered its sharpest contraction in eleven years, with real incomes falling by 3.5 percent. Unemployment is currently at its highest since 2011, with Russians also having to cope with an increase in the prices of food, medicine and utilities. Prior to his fourth re-election in 2018, Putin pledged a steady increase in real disposable incomes, along with a 6.5 percent decrease in the poverty rate by 2024. These two goals have now been postponed for six years until 2030, with government officials blaming the coronavirus pandemic for this delay. The reality, however, is that these are the effects of years of austerity measures – which the pandemic has only served to highlight and exacerbate.

The anger fuelled by the video led to Russia experiencing its biggest and most widespread protests in nearly a decade, with people braving extremely low temperatures to express their discontent with the government’s actions. Where previous protests were mostly limited to Moscow and St Petersburg, this recent wave of demonstrations saw people taking to the streets across the country, some for the first time in their lives. Corruption and inequality are not new phenomena in Russia – when set against the backdrop of continuous economic deterioration and hardships, however, they become nearly impossible to tolerate.

The government’s response to the protests was quick and brutal. In an effort to discourage more people from joining the demonstrations, the riot police used violence against peaceful protesters and arrested thousands of people. The crackdown was not limited to the streets – the FSB conducted a series of raids and detained many colleagues and associates of Navalny, including the jailed opposition leader’s wife, Yulia Navalnaya. Russian law enforcement agencies have also warned that if the rallies continue and turn violent, participants could face prison sentences of up to eight years, with fifteen-year sentences for those who engage in violence. Ninety criminal cases have reportedly been open, with the Russian Interior Ministry citing public order violations and the restrictive measures currently in place as the main motivation.

As part of the coronavirus restrictions, all demonstrations are currently prohibited in Russia. The government, however, is also making broad use of legislation put in place after the 2011-2012 anti-Kremlin protests, according to which taking part in unsanctioned rallies is punishable by heavy fines and prison terms even if they remain peaceful. Among further crackdown plans, the government has included blocks on all social media channels, as the Kremlin is very much aware that this is the main tool used by the opposition to mobilise support.

On their part, the Western powers have all called on Russia to free Navalny, with United States Secretary of State Antony Blinken declaring that Moscow “has international obligations to respect equality before the law and the rights to freedom of expression and peaceful assembly”. In response, Russia called the demands for Navalny’s release “disconnected from reality”, and Foreign Ministry spokeswoman Maria Zakharova has been cited as saying that “there is no need to interfere in the internal affairs of a sovereign state”. As a result, on 2 March, the United States and European Union published a list of Russian officials and companies that will face sanctions for Navalny’s arrest and sentencing. Crucially, Washington and Brussels made no further mention of the Russian authorities’ violent response to the protests – nor were any sanctions imposed on President Putin himself.

As the West is eager to maintain a relationship with Moscow moving forward, it is only through internal pressure that any change can occur. While Putin’s place as Russian leader is in no real danger – as following last year’s referendum, he is likely to be president until at least 2036 – his regime’s legitimacy rests almost exclusively on an image of widespread popularity and support. As seen with the Valentine’s Day protests, where people held flashlights in the courtyards of their apartment buildings, creative ways to circumvent the current crackdown can be found – and with every expression of opposition to the government’s actions, the cracks in the system’s legitimacy become deeper.

Alexey Navalny’s arrest and sentencing brought the people of Russia to the streets, but it was anger at their current situation that kept them there. The ill-treatment you are likely to experience if you disagree with the government, the widening gap between the rich and the poor, and years of declining living standards all combined to generate Russia’s largest-scale demonstrations in nearly a decade. The sentiment for change is there – and if no change comes, this will not be the Russian people’s last manifestation of discontent.

2021-03-12
Irena Baboi
Previous: Humans must retain control of military AI Systems
Next: Analyzing the proposed solutions to the Cyprus Dispute