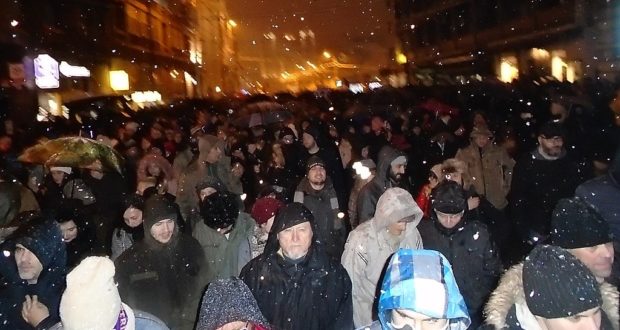 “1 in 5 million”: Serbia’s struggle for democratic rights and freedoms

Since the beginning of December, thousands of Serbians have been taking to the streets of Belgrade every weekend to call for their government’s resignation and demand free and fair elections. The protests were triggered by a 23 November incident, when opposition politician Borko Stefanovic was attacked and beaten by masked men in the southern Serbian town of Krusevac. The protesters also demand an investigation into the attempted murder of online journalist Milan Jovanovic, whose home in the Belgrade suburb of Vrcin was set on fire on 12 December, and justice for Kosovo Serb politician Oliver Ivanovic, whose murder is yet to be resolved. As the protests are now spreading to other cities and towns, the aims of the Serbian people braving the cold are clear – an end to what they see as political violence on the part of their government, and a level of democratic freedoms and rights worthy of a European Union candidate country.

The ongoing anti-government protests are formally organised by a group called “Protest Against Dictatorship”, the same group that organised the mass protests that followed Vucic’s presidential win in April 2017. Several opposition parties have also joined the call for free and fair elections, and put forward a joint agreement demanding effective prevention of abuse of the electoral roll and public resources during the campaign, control of the electoral process, election campaign and during election day, and criminal sanctions against those who abuse the campaign.

The people out in the streets for the past two months are also accusing President Aleksandar Vucic and his administration of establishing autocratic rule and complete control over the media, and using the latter to attack journalists and members of the opposition. According to a recent country report by Freedom House, “independent and investigative journalists [in Serbia] face frequent harassment, including by government officials and in pro-government media”. The report also highlights a gradual weakening of media freedom by President Vucic’s administration, and a tendency on the part of the incumbent government to portray investigative and critical media organisations as foreign-backed propaganda channels. Similarly, in its 2018 country progress report, the European Commission noted that Serbia’s public service broadcasters, RTS and RTV, should “more actively engage in opening their programmes to a plurality of views and promoting public dialogue”, a call that protesters have put forward as well.

In response to these actions and accusations, President Vucic initially stated that he will not yield to popular pressure “even if there were 5 million people on the streets”, and hinted that he would welcome the prospect of snap elections. As the protests reached their fourth week, however, Vucic agreed to listen to the demonstrators’ demands, but added that there will be no dialogue with the opposition.

Less than three weeks later, in a classic attempt to distract attention and give the impression everything is in order, Vucic organised a lavish parade to welcome Russian President Vladimir Putin on his visit to Serbia. The elaborate reception was also an opportunity to remind everyone that Vucic has friends in high places – and show the people out in the streets that his position is secure enough for him to afford to not take them too seriously.

Former ultra-nationalist turned Western supporter, Vucic gained praise from the United States and the European Union for his promises to lead Serbia towards European accession and resolve the country’s ongoing dispute with Kosovo. Over the years, Vucic has also made sure that Serbia maintains close and friendly ties with Russia, thus achieving a relatively successful balancing act between the West and the East for his country. His external openness is, however, matched by his internal desire for complete control over Serbia – and a tight grip on both the executive and legislative continues to prove more important than democratic rights and freedoms for his people.

Since coming to power in 2014, the Progressives have been accused of corruption, eroding of media freedom, running campaigns against government critics and the opposition, introducing laws that affect workers’ and young people’s rights, and generally maintaining monopoly over all decision-making in the country. With Vucic at their lead, they have ensured that information is controlled and manipulated, that voting is not entirely fair and free, and that political allegiance continues to matter when it comes to well-paid jobs and promotions. As such, the party has gradually brought Serbia back to the social and political situation the country found itself in more than eighteen years before. The parallels drawn by the media to the popular unrest against Slobodan Milosevic’s decade of dictatorship in 2000 are particularly illustrative of this point – almost two decades later, in a European Union candidate country, the people still need to voice their opposition to autocracy, and demand rights and freedoms that should have been theirs for years.

The issue with Serbia’s current anti-government movement – as with many similar movements in the region and elsewhere – is that it has not produced a feasible alternative to the party in power. The protesters lack distinguishable leaders, as neither have the people out in the streets put themselves forward ahead of potential snap elections, nor have they voiced support for any of the current opposition parties. As things stand, Vucic’s Progressive Party enjoys the backing of 53 percent of the electorate, along with a comfortable majority of 160 deputies in the 250-seat parliament. The opposition parties are trailing far behind, and even if they ran as an alliance, they could only expect to count on approximately 15 percent of the vote.

It is, however, not exactly smooth sailing on all fronts for Vucic and his Progressive Party. A quick fix to the Serbia-Kosovo dispute – in the form of a land swap agreement between the two countries – has temporarily been taken off the table. In November of last year, Kosovo’s government imposed a ten percent tax on imports from Serbia and Bosnia-Herzegovina, a move Pristina argues is in retaliation for the two countries’ refusal to recognise its independence, and “savage” acts against the youngest Balkan republic. The “savage” acts most likely refer to Serbia’s recent intensifying of efforts to persuade countries across the world to withdraw their recognition of Kosovan statehood, a campaign which has so far come with some degree of success. The import taxes now stand at one hundred percent since December – and with one after another EU-brokered negotiation meetings failing to produce any tangible results, it remains to be seen how long Brussels will continue to consider the current Serbian government as the best available option.

That thousands of Serbians have taken to the streets to fight for democratic rights is no small feat – mass protests in Serbia have been a rare occurrence since the ousting of Slobodan Milosevic, but the people’s determination to see change happen has been evident every time. Even if the current protests fail to achieve their goals in the short-term, they are yet another signal that the status quo is unfeasible in the long-term. With European Union candidate status come Western-level demands and expectations – and the Serbian people’s tolerance for a self-serving leadership has reached its limit.

2019-02-07
Irena Baboi
Previous: Reflections and Projections – Human Security Issues in 2018 and 2019
Next: Saudi Arabia and its Eastward Shift